29/09/22
Back to articles
Tweets by DundeeCouncil 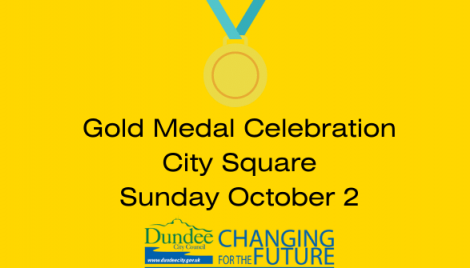 People in Dundee will have the chance to congratulate the city’s Commonwealth Games gold medal winners on Sunday (October 2) in a City Square celebration.

Lord Provost Bill Campbell is hosting a civic reception for runner Eilish McColgan and boxer Sam Hickey following their success at the Commonwealth Games in Birmingham.

The public will have an opportunity to see the golden duo when they make an appearance on the balcony of the City Chambers in City Square at 2.15pm on Sunday.

Lord Provost Bill Campbell said: “The nation was thrilled to see Eilish and Sam excel on such a prestigious stage as the Commonwealth Games this summer.

“It is fitting that the city of Dundee recognises their achievements and gives people the chance to share in the moment as well.

“Their exploits were seen by millions across the world but nowhere celebrated like Dundee, the city where these athletes put in the hard yards and the training needed to help them get on and win gold medals.

“I also wish them every success in their ongoing careers.

“Eilish and Sam are inspirational figures and I am sure that their success will encourage young people across the city to follow in their footsteps.

“I would encourage as many people as possible to come down to the City Square on Sunday to give them a rousing Dundee reception!”