Progress on delivering vision for city

19/11/21
Back to articles
Tweets by DundeeCouncil 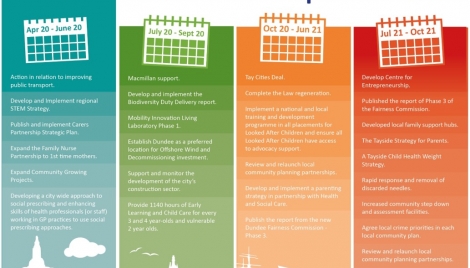 Progress and challenges in delivering on the Dundee Partnership’s vision for the future of the city and the council’s key priorities during the Coronavirus pandemic have been outlined in a new report.

Councillors on the Policy and Resources Committee will next week consider an update report on the Dundee Partnership’s City Plan and the Council Plan.

The City Plan sets out long term and ambitious targets for improving a range of outcomes across the partnership agenda for the period up to 2026, while the Council Plan details the local authority’s targets and actions for making improvements on its priorities up to 2022.

The half-year report acknowledges that the Covid-19 pandemic continues to impact on the City Plan and Council Plan’s targets and deadlines for some of the major projects previously agreed.

Nonetheless, the half-year report covering the period up to March details that 65% of the City Plan’s key performance indicators were showing improvement since the baseline year of 2016-17.

Within the Council plan targets, 60% had improved since the baseline year. The majority of the indicators in both reports improved or stayed the same compared with the previous year.

Key achievements include publishing the report on phase three of the Fairness Commission, developing Waterfront Place and the Active Travel Hub and reviewing and relaunching local community planning partnerships.

A rapid response for the removal of litter, discarded needles, graffiti and other community concerns has been maintained and local crime priorities have been agreed.

Actions have also been completed in areas as diverse as public transport, family nursing, construction, offshore wind and decommissioning, biodiversity and the Tay Cities Region Deal.

Council leader John Alexander said: “This progress report on the City and Council Plans outlines many areas where the Council and the Partnership are making a difference to people’s lives across Dundee.

“Of course, there were a number of challenges to be tackled in order to achieve all of the ambitions set out in the City Plan and the Council Plan, even before this pandemic.

“Notwithstanding these additional challenges, we remain committed to making Dundee a better city for everyone.

“The city council cannot work alone and I am pleased that our partners in the public, private, education and third sectors are playing a major part in these efforts.”

A major focus throughout the year has been acting on the improvement plan that followed the Best Value Assurance Report by Audit Scotland.

A separate report to go before the committee next week details the ongoing actions being taken in response to the Review of the Council, which found that “the council and its partners have a clear and ambitious vision for Dundee, with the City Plan and the Council Plan showing how they aim to improve life in the city.”

Despite the pandemic, the update shows that good progress has been made on improvement actions in the year since the Review was published.

The report states that 25 out of 33 (76%) actions have either been completed or are on target for completion by the original due date, including the development of individual service plans, how the Dundee Partnership manages performance and demonstrates impact on key priorities, business case processes for significant capital projects and a framework for engagement and consultation with citizens and communities.

Back to articles
Tweets by DundeeCouncil
Olympia maintenance programme

A COMBINATION of survey works, planned refurbishment and repairs could see the swimming pools at...