29/07/21
Back to articles
Tweets by DundeeCouncil 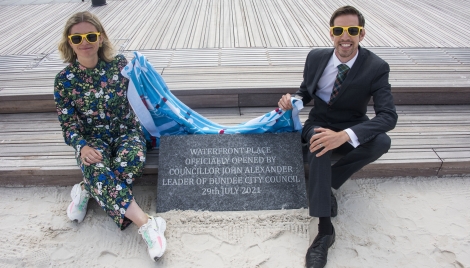 A LANDMARK site on Dundee’s £1billion waterfront has been officially opened today (THURSDAY).

Waterfront Place, which will include the city’s urban beach, an active travel hub, landscaping and interactive play area was given the official seal of approval by John Alexander leader of Dundee City Council at a ceremony on the site adjacent to V&A Dundee.

He said: “This is one of the prime spots on the whole of the waterfront and right from the planning stage it was important that it could be accessed and used by everyone.

“Anyone who comes along will see for themselves the quality of the work, which was in itself a key part of our desire to attract people here, not just from the city but across Scotland, so that they could truly experience the re-established connection between the city and the river.

“Work started in February 2020, and was obviously slightly delayed by the pandemic, but we wanted to officially open the site now, at the height of summer, despite finishing touches still going on in some places.”

Costing just over £6m, the work at Waterfront Place received £1m of funding from the Scottish Government's European Regional Development Fund programme through the Low Carbon Travel and Transport Challenge Fund delivered by Transport Scotland. The fund has a focus on supporting projects which enable everyday functional journeys to be taken by walking, cycling and public transport and to support an increased proportion on ultra-low emission vehicles on Scotland’s roads.

The project was developed by contractors Morgan Sindall Construction and Infrastructure Limited and when complete in the next few weeks will include a stainless-steel whale sculpture designed by award-winning British artist Lee Simmons.

Formed in tubular sections that follow the contours of the creature, the structure will flow from the northern entrance of Waterfront Place with the tail arching towards the Tay to capture a sense of movement.

Visitors to the park will also enjoy a multi-sensory experience using both sound and light with stainless steel tubular like maze structures representing kelp-like forests or water columns.

Cllr Alexander added: “What we will see here by the end of the summer when this project is complete will be tangible evidence of the further progress being made at the waterfront.

“It forms the next step forward in our phased and managed growth at the waterfront and the months and years ahead will see much more to come on the other sites across the area.”

The urban beach opens today (Thursday) and with greater access to the main landscaped area due by the end of the month and the water feature and dunes due in early September the installation of the whale sculpture and opening of the play area will complete the project by the end of next month.

Councillors will be asked to permit SAMH (Scottish Association for Mental Health) to carry out a...