24/01/19
Back to articles
Tweets by DundeeCouncil 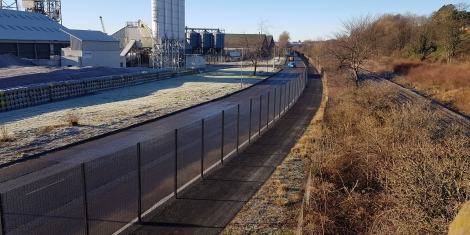 A SIX-FIGURE investment in the city’s walking and cycling infrastructure welcomed its first users today (THURSDAY).

More than £376,000 was put into new surfacing, a boundary fence and improved lighting on a stretch of shared use path through The Port of Dundee.

Lynne Short convener of Dundee City Council’s city development committee said: “This is a flat route alongside the river and now that it is smoother and better lit it will be easier for cyclists and pedestrians to use.

“The investment in these enhancements was specifically made to encourage walking and cycling, not just for leisure and pleasure, but also as a useful and practical alternative to using the car.”

An agreement between the city council and Forth Ports, the port owners, opened up access through the harbour area via the path.

David Webster, senior port manager at The Port of Dundee added: “The cycle path through the port has always been popular and with the improvements to the route and the surface, even more people can enjoy a safe journey on bike or foot to and from the City Centre.”

Forming part of the National and North Sea cycle routes and also the local Green Circular the path is popular with walkers and cyclists.

The project was awarded funding as part of the Low Carbon Travel and Transport Challenge Fund established by Transport Scotland from funds awarded under European Regional Development Fund 2014-2020. The fund helps develop new active or low carbon travel options across Scotland. The work was carried out by Tayside Contracts.

Cabinet Secretary for Transport, Infrastructure and Connectivity Michael Matheson said: “I’m proud that this government continues to support high impact projects to help encourage the shift towards active and low carbon modes of travel and transportation.

“Through the Low Carbon Travel and Transport Challenge Fund, we are supporting many projects across Scotland which increase travel options for sustainable, active or low carbon transportation.

The improved path through the port, for those on foot and by bike is now much easier to undertake.   It will be good to see more and more eople begin to adopt the route as an everyday part of their journey between home and city centre.

“The Docks Way in Dundee supports active travel through the provision of an accessible walking and cycling route, highlighting Dundee City Council’s commitment to support sustainable and active travel across the city.”

Kevin Cordell who is Dundee City Council’s spokesperson on cycling said: “The newly opened path will form part what is already a popular commuter route between Broughty Ferry and the city centre.

“The cycle counter at the Douglas Terrace end of the path has already shown that tens of thousands of journeys have been made since it was installed in June demonstrating the value of our investment in getting more people cycling, more often.”

The works at the path are part of Dundee City Council’s wider commitment to increase cycling, walking and more sustainable forms of transport across the city.