02/12/22
Back to articles
Tweets by DundeeCouncil 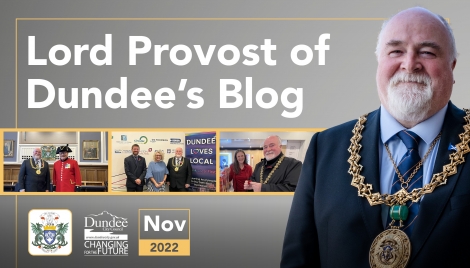 Hello, and welcome to my sixth Blog as the Lord Provost of Dundee.

As is usually the case in November, the start of the month was filled with much reflection as Remembrance events took place in the lead up to Remembrance Sunday on the 13th. Such events are always moving, emotional and an honour to be given the opportunity to take part in them on behalf of the city.

Later on, in what was a busy month, I also had the honour of leading the torchlight procession at the first ever Dundee Hooley which marked this year’s St. Andrew’s Day. It was fantastic to see such a great turn-out with people of all ages taking part in the celebrations.

Activities over the past month included:

For updates as they occur, the latest Lord Provost news and activities are available on both Facebook and Twitter.

Thank you for taking the time to read this Post and I hope to update you further on my civic responsibilities in the future through my December blog.

A pilot scheme to improve the city centre?s appearance by changing the way commercial waste is...

THE LATEST addition to Dundee?s cycling infrastructure has been unveiled at the city?s bus...