26/04/19
Back to articles
Tweets by DundeeCouncil 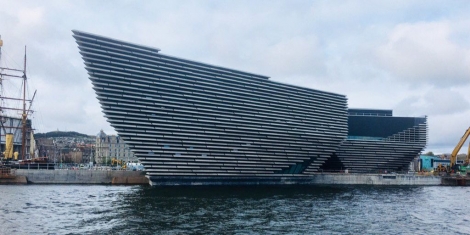 V&A Dundee has been selected as one of five finalists for Art Fund Museum of the Year 2019, regarded as the most prestigious museum prize in the world.

The annual award celebrates innovation and exceptional achievement in museums and galleries across the UK.

The winning museum, which will receive £100,000, will be announced at a ceremony at the Science Museum, London, on Wednesday 3 July 2019. The other shortlisted museums will receive £10,000 each in recognition of their achievements. This year’s judging panel for the Art Fund Museum of the Year 2019 award, chaired by Stephen Deuchar, Director of Art Fund, are David Batchelor, artist; Brenda Emmanus, broadcaster and journalist; Bridget McConnell, Chief Executive, Glasgow Life; Bill Sherman, Director, Warburg Institute.

"This is a hugely prestigious award to be shortlisted for and it will further raise the profile of the museum and our city.

"We are at the centre of unprecedented international attention and we are all working hard to create more exciting opportunities for Dundee and its people for the future."

To celebrate being shortlisted for Art Fund Museum of the Year 2019, V&A Dundee will open late every Friday night for the run of Videogames: Design/Play/Disrupt, the museum’s current major exhibition. The exhibition is on until 8 September and the whole museum will be open until 21.00 every Friday from 26 April.

V&A Dundee opened on 15 September 2018, over a decade after the first conversation between the University of Dundee and the V&A about creating a new museum at the heart of the city’s regeneration. Together with Abertay University, Dundee City Council and Scottish Enterprise the museum was founded on a unique partnership of five organisations.

Throughout its creation V&A Dundee worked to inspire people and promote the understanding of design. In March 2018 the museum marked the achievement of engaging with 100,000 people, six months before opening. To date, over 500,000 people have visited the museum.

Philip Long, Director of V&A Dundee, said: “It is an honour for everyone who has helped create, launch and run V&A Dundee for the museum to be shortlisted for Art Fund Museum of the Year 2019.

“This award recognises achievements in 2018, a year when we reached the milestone of engaging over 100,000 people some six months before opening the museum, travelled across Scotland to work with young people, and then launched the museum with a thrilling family festival of design and music.

“Since opening we have already welcomed over 500,000 visitors, double our pre-opening estimates, as well as attracting many people to visit other visitor attractions in Dundee and spend time in this beautiful area of Scotland.

“2019 is set to be a very exciting year for the museum, having just opened our new exhibition Videogames: Design/Play/Disrupt and now as a nominee for the biggest museum prize in the world.”

Speaking on behalf of the judges, Stephen Deuchar said: “The five shortlisted museums have each offered outstanding and different approaches to the vital task of engaging with the widest public in new and adventurous ways. We congratulate all those who are on the shortlist and encourage everyone to go and visit them.”

SHOPPERS and visitors returning to Dundee city centre after lockdown will find a brighter...