30/04/18
Back to articles
Tweets by DundeeCouncil 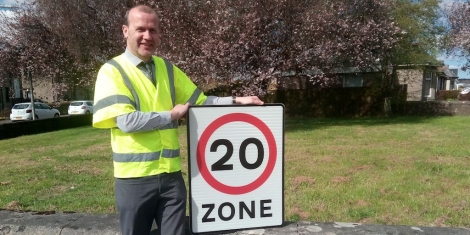 Traffic in and around the Glens and Johnston Avenue will be subject to the 20mph maximum for 12 months in the interests of road safety and to create a safer environment.

Roads bosses will review the scheme after 12 months to investigate its effectiveness.

Mark Flynn depute convener of Dundee City Council’s city development committee was on hand to see for himself signage and road markings being put in place.

He said: “This area came out very strongly in favour of reducing the speed limit to 20mph when we carried out our consultation, and the works today signal the last piece of the jigsaw before that trial can start.

“A trial will help us to find out more about how to balance residents' responses with the need to keep the city safely on the move as effectively and efficiently as possible so it is crucial that we take the full year to find out exactly what effect slowing down traffic will have.

“The limit will officially come into force when these works are complete and we will be keeping a close eye on road safety, traffic movement and pedestrian access throughout the year.

“The new reduced limit will be widely publicised and these signs and markings send out a clear message to drivers that they should be slowing down here.”

More than 95% of residents in Johnston Avenue who responded to the city-wide council-run survey in 2016 were in favour of making it a 20mph zone. The overall figures showed that 56% of those who responded city wide said they wanted the maximum speed reduced by 10mph.

Alan Ross convener of Dundee City Council’s community safety and public protection committee added: “Everyone should feel safe in their own community and finding out what effect reducing speed limits has will contribute to that.

“Most of the vehicles in the Glens are driven by residents or visitors and it is important that they set an example by sticking to 20mph around their homes.