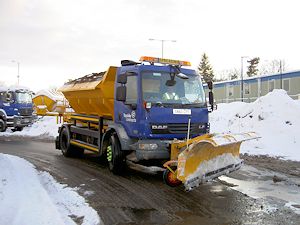 Dundee City Council’s aim is to help keep its roads and footways as safe as possible. During winter months we constantly monitor weather conditions and forecasts using modern Ice Prediction and Thermal Mapping Systems. Gritting and ploughing vehicles are on standby to act when required.

Over 750 grit bins are provided at locations such as steep gradients, bends, steps and adjacent to sheltered housing. Everyone can do their bit to help, particularly in snow conditions. Clearing footways around your own home and helping elderly or infirm neighbours will ensure that many footways will be safer and easier to use. If shovelling snow, think about where you are going to put it, so that it does not block people's paths, or simply shift the problem elsewhere.  Make sure it will not cause problems when it melts.  Piling snow over gullies or drains may stop melting snow from draining away and allow it to refreeze.  The grit bins will be replenished with grit/salt during the winter for use by the public on a self-help basis but should not be used for treating private property.

In snow conditions telephone enquiries to the council may be made using the following number: 0800 145 6897