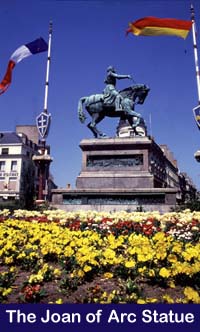 After the Franco-German Armistice in June 1940, three submarines of the Free French Navy were based in Dundee for the duration of the war and fought on behalf of the Allies. Dundonians set up a club in Dundee's Nethergate for these Free French submariners and thus Dundee had a particular connection with the French in war-time, so that when, after D-Day it was proposed that Scottish towns and cities "adopt" newly liberated French towns and cities, Dundee "adopted" Orléans. Orléans, 80 miles south-west of Paris and situated at a vital crossing point on the great River Loire, suffered severe bomb and fire damage both in 1940 and 1944.

Dundee's Lord Provost Sir Garnet Wilson was invited to go to Orléans in 1946 to be officially thanked for Dundee's help. This was followed in 1947 by a return visit to Dundee by members of Orléans City Council led by the Mayor Dr Pierre Chevallier. Since 1948 Dundee has been represented at the famous Joan of Arc Festivities which take place each year in Orléans on May 8th and every post-war Lord Provost has visited our oldest twin.

The first school exchange between secondary school pupils took place in 1947 and these official pupil exchanges continued every year until the mid-1990s. From 1947 until he retired in 1965 the Orléans students were accompanied by Monsieur Clovis Duveau who became very well known to Dundonians as their guide and interpreter during visits to Orléans. In 1996 as part of the celebrations of the 50th anniversary of the twinning between the two cities, a street in Dundee was named after Monsieur Duveau who, at the age of 96 was able to be present at the official naming of Clovis Duveau Drive.  In the same year Evelyn Hood, who has been involved with the link since 1951, was made a Citoyen d'Honneur de la Ville d'Orléans.

Since 1946 Dundonians and Orléans quite literally in their thousands have exchanged visits. Apart from civic exchanges, these include several thousand school children, golfers, Rotarians, members of the legal profession, people in the hospitality industries, city centre managers, personnel from the Planning Departments, broadcasters, choral societies, rugby teams, walking clubs, cycle teams, university and college students, teachers, doctors and nurses, amateur artists, members of the Orléans and Dundee Universities of the Third Age ... Throughout the years a great number of personal and family friendships have been established so that there are exchange visits taking place at all times - and there's been a wedding or two as well!

To mark the 50th, 60th and 70th anniversaries of the twinning, Testaments were signed renewing the bonds and we look forward to celebrating our 75th anniversary in 2021.