19/06/20
Back to articles
Tweets by DundeeCouncil 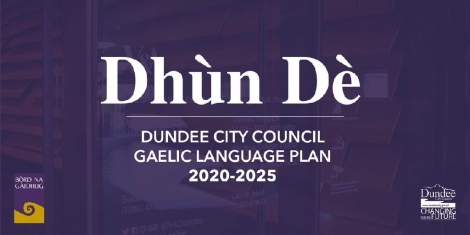 Dundee City Council is inviting comments on a draft of its second Gaelic Language Plan.

The Gaelic Language Plan (Scotland) Act 2005, agreed unanimously by the Scottish Parliament, established a body called Bòrd na Gàidhlig to encourage the use and understanding of Gaelic and work towards increasing the number of Gaelic speakers and extending the everyday use of the language.

Under the Act, the Bòrd has authority to require all public bodies to develop Gaelic Language Plans.

The Council’s first Gaelic Language Plan was produced in 2015 and the Bòrd have issued a notice that the Council is required to produce its second Plan by September 2020.

The Act, and the Guidance on developing plans produced by the Bòrd, recognise that plans will differ depending on where the public body operates and the number of Gaelic speakers it serves.

So, plans should be reasonable and proportionate, but also be positive, pro-active and supportive, demonstrating equal respect for Gaelic and English.

Councillor Lynne Short, Equalities Spokesperson for Dundee City Council, said: “Dundee City Council is committed to giving equal respect to the Gaelic language in recognition of its status as one of Scotland's national languages, its contribution to the richness and diversity of Scottish culture and its importance within our nation's heritage.

“This is the Council's second Gaelic Language Plan and it demonstrates our commitment to maintain the progress made in recent years and to increase momentum in line with aims of the National Gaelic Plan.

“Significant progress has been made in raising awareness of Gaelic and increasing the visibility of the language in the city, and this Plan aims to further increase the use and learning of Gaelic and to further promote a positive image of Gaelic in Dundee.”

A copy of Dundee City Council’s draft second Plan is available on the consultation section of the Council’s website along with information on how to make comments.

Comments are requested by 1 August 2020 so these can be considered in finalising the Plan.