04/12/19
Back to articles
Tweets by DundeeCouncil 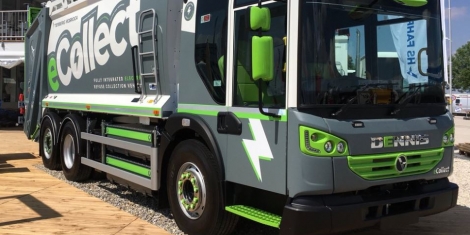 DUNDONIANS could see the city’s first two electric bin lorries take to the streets next year in a move thought to be the first of its kind in Scotland.

Councillors will be asked to approve the purchase of a pair of 26 tonne Dennis Eagle refuse collection vehicles when they meet next week.

Mark Flynn deputy convener of the city development committee said: “These two lorries plus a couple of fully electric minibuses and a large mechanical sweeper are a big physical demonstration of our continued commitment to clean air in the city.

“Buying these electric commercial vehicles will save around £23,000 a year in fuel costs and reduce carbon dioxide emissions by 60,500kg. Our experience is that when compared with their fossil fuel counterparts there will also be savings on the costs of servicing and regular maintenance, so this is a big win any way you look at it.”

As part of the council’s drive to reduce the environmental impact of its fleet, discussions have taken place with Transport Scotland to support the transition of larger vehicles to zero emission options.

A significant investment from Transport Scotland in this project will ensure Dundee remains at the forefront of EV use and what fleet chiefs find out from these projects will support the wider ambition to decarbonise transport across the country.

An innovative mix of infrastructure that will be needed to support the larger fleet vehicles will be installed at Marchbanks Depot with additional funding from Transport Scotland.

In total the five new vehicles will cost around £1.5m and councillors will be asked to approve their purchase at the city development committee on Monday (December 9).

The refuse collection vehicles, which are expected to hit the streets next April, and street sweeper will be a straight replacement for existing plant nearing the end of its useful life.

Detailed analysis has shown that despite greater purchase costs than the equivalent fossil fuel vehicles, there will be an overall saving over their lifetime from reduced fuel and maintenance costs.

The minibuses will replace current hired standard minibuses and will improve the quality of service offered to residents.