16 Days of Action Against Gender Based Violence

18/11/19
Back to articles
Tweets by DundeeCouncil 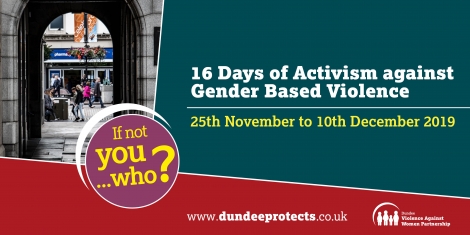 A 16 DAY programme of events and activities in Dundee to highlight violence against women is set to launch later this month.

The city’s Violence Against Women Partnership is marking the worldwide 28th annual campaign to eliminate all forms of gender based violence, with talks, performances and a special march.

Running from Monday November 25, the International Day of No Violence Against Women, to December 10 which is Human Rights Day, the campaign calls for the elimination of all forms of violence against women.

Each year the Dundee Violence Against Women Partnership works with member organisations and national groups to bring together a programme of awareness raising activities.

People living in Dundee, as well as professionals working in the field, are being encouraged to attend a range of events and to come together to support the elimination of violence against women in all its forms.

Ann Hamilton, independent chair of the Dundee Violence Against Women Partnership said: “This year we have a strong and specific message that stands firm against rape. While the names, times and contexts may differ, women and girls universally experience rape, sexual violence and abuse in times of peace or war.

“Violence against women and girls is unacceptable in any form and will not be tolerated in Dundee. We will continue to work closely with partners across the city to prevent and eliminate it.

“This ambitious and exciting programme is a sign of the city’s commitment to ending violence against women and I would urge everyone to back this campaign by taking part in any way they can.”

On Monday (December 2) the penguin statues outside the City Churches will be dressed in T-shirts bearing the logos of a number of local partners who deliver services for women, marking their support for the campaign.

A whole day is turned over to a showcase event on Tuesday December 3, when the Steeple Church will play host to professionals highlighting the new and innovative work around Violence Against Women that has taken place in Dundee over the past year.

Open to professionals only the free event can be booked at: http://bit.ly/2XfnPqO

A Reclaim the Night March will take place on Thursday December 5 in the city centre from 5.30pm.

Reclaim the Night is an international movement against sexual violence specifically protesting against victim-blame which advises women to stay off the streets at night to avoid the risk of sexual violence or harassment.

Through marching, the event which is organised by Dundee Women’s Rape and Sexual Abuse Centre, looks to raise awareness of the issues around sexual violence and to promote the creation of a safer environment for women to be able to walk safely in the streets after dark.

A full list of all of the activities taking place during the 16 days can be found at: https://www.dundeecity.gov.uk/sites/default/files/publications/16_days_vaw_programme_final.pdf