12/11/19
Back to articles
Tweets by DundeeCouncil 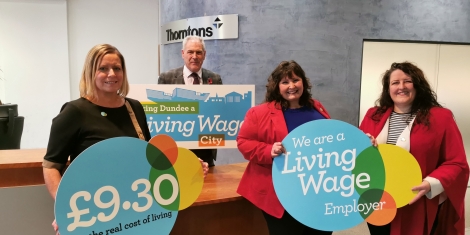 This comes during Living Wage Week (11th– 15th November), which is an annual celebration of the Living Wage in the UK.

The UK wide campaign will see employers up and down the country marking their commitment to paying the real living wage.

Thorntons is one of Scotland’s largest full-service legal and estate agency firms, with offices all over the country. They have over 500 colleagues.

Earlier this year, Dundee’s action plan setting out how businesses across the city will work together to ‘Make Dundee living Wage City’ was launched, in partnership with Living Wage Scotland.

“There are a lot of benefits involved with becoming a business who pays the living wage and becoming accredited, we also know that there is a huge benefit to the wider community.

“There is a wealth of evidence that employees who benefit from a pay rise and receive the Living Wage spend that money locally.

“It may sound simplistic but so many of the best ideas are.”

“At Thorntons, we have always focussed on creating a positive working environment where everyone is treated fairly.  We value all of our colleagues, in every role, which is why we are delighted to be involved with the Living Wage City programme.

We are proud to be the largest private sector employer based in Dundee to achieve Living Wage employer status since ambitions to create a Living Wage City were announced by the Council earlier this year.   We feel that as well as simply being the right thing to do as an employer, we hope we will inspire other businesses in the area and beyond to follow suit.”

“The real Living Wage is one of the key tools at our disposal to help make an impact on levels of in-work poverty in Scotland. There is a strong business case for paying the real Living Wage; but crucially it allows those in work to become more included in society, better provide for their families, and feel that their value and hard work is recognised by their employer. We are delighted to congratulate Thorntons Solicitors on becoming a Living Wage employer. I hope more organisations follow their lead by becoming accredited”.

There are now over 70 accredited Living Wage employers based in Dundee, compared to 51 when the Living Wage City campaign was launched in the spring.

We are delighted that Thorntons Solicitors, as a prominent employer based in Dundee have confirmed their Living Wage status for workers across all their sites. Their accreditation is a significant contribution to Making Dundee a Living Wage City and to the broader Living Wage movement.”

“We are delighted to welcome Thorntons Solicitors, to the Living Wage movement.

We are a movement of over 1700 Scottish employers who together want to go further than the government minimum to make sure that all their staff earn enough to live on. We have lots of smaller employers as well as larger and iconic Scottish employers like SSE, Standard Life, Barrs, Mackies, ScotRail, D.C. Thomson and many more.

These businesses recognise that the Living Wage accreditation is the mark of a responsible employer and they, like Thorntons Solicitors,  join us, because they too believe that a hard day’s work deserves a fair day’s pay."