17/10/19
Back to articles
Tweets by DundeeCouncil 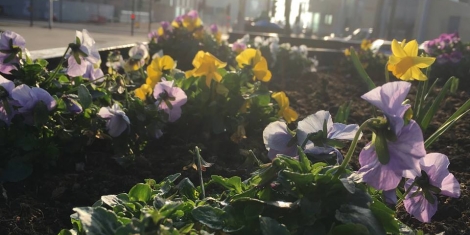 Beautiful Scotland commended the Council’s partnership work on restoring the dunes on Broughty Ferry’s coast. The use of land alongside Dundee's railway lines was also praised. The area has created a nature reserve allowing flowers to regenerate and has attracted walkers and wildlife.

Judges said the annual planting of flowers around the city enhanced the visual appearance of Dundee for residents and visitors. This action has led to a significant increase in pollinator numbers, as recorded by local community volunteers.

The awarding organisation highlighted work by Dundee City Council to develop sustainable travel. The Council’s new CycleWays network showcases the focus on such transport. Judges also highlighted further investment in electric car charging hubs around the city. The use of recycled materials in construction was also praised.

Ardler Environment Group has been recognised for their extensive planting and upkeep of the Ardler Complex's three gardens.

Neighbourhood Services Committee Convener, Councillor Anne Rendall, said: “Both the City Council and community volunteers have been working hard throughout this year to ensure the city is seen at its best.

“It’s fantastic to see that the hard work is being recognised. There is a real sense of community and enthusiasm in our greenspaces. This is in no small part down to groups like Bonnie Dundee and Ardler Environment Group in joint working with the Council’s Environment Team.”

Back to articles
Tweets by DundeeCouncil
Recovery Described as Toughest Challenge

City council leader John Alexander is describing the task facing Dundee to recover from the...