11/07/19
Back to articles
Tweets by DundeeCouncil 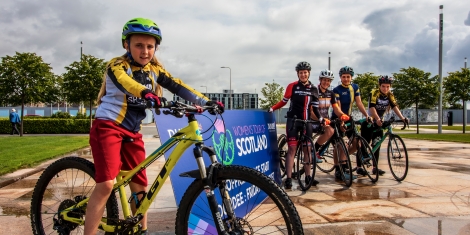 Dundee has today marked a month to go until the inaugural Women’s Tour of Scotland on the start line of the picturesque Slessor Gardens..

Riders from local women’s cycling clubs joined Sports Minister Joe FitzPatrick and representatives from Dundee City Council, Women’s Tour of Scotland and Visit Scotland’s EventScotland team to celebrate what is set to be a landmark occasion for the city and the country.

16 of the world’s elite teams in women’s cycling will travel from around the globe to line up on the start line in Dundee on Friday 9 August. Olympic champion Katie Archibald will lead the Scottish team in the battle for the first ever Baillie Gifford Leaders Jersey.

And with Dundee soon to open a new public funded velodrome later this year after the Tour, cycling is set to bring a tourism boost for the local economy. Sports Minister Joe FitzPatrick also believes the race, which is being partly funded by EventScotland, will help create a legacy to get more people active and riding their bike within the local communities.

He said: “The inaugural Women’s Tour of Scotland promises to be an exciting three days of cycling action across the country and a great opportunity to showcase Scotland as the perfect place to live, work, study and invest.

“I’m particularly excited by the Tour’s legacy and development programme, which alongside the professional race, will not only inspire girls and women to take part in sport but also provide spectators and fans across all three stages the chance to get involved in cycling.

“With the UCI Cycling World Championships coming to Scotland in 2023, this event adds to our ambition of becoming one of Europe’s top cycling nations.”

Darren Clayton, Managing Director at the Women’s Tour of Scotland said: “This is what this event is all about, making sure we can bring a buzz and an excitement for local fans across Scotland but also about creating a legacy of more cyclists.

“To have the backing of the government for that is fantastic and we want as many people as possible to come out and see what amazing athletes we have on show. Slessor Gardens is a really special spot and I can’t wait for the race to get started in this brilliant city.”

Dundee Council’s Deputy City Development Councillor Mark Flynn said: “This will be a great occasion for Dundee and I would like to encourage as many people as possible to come down to Slessor Gardens to see the race start.

“The Women’s Tour of Scotland is an exciting new event which I hope will encourage even more participation in cycling.”

The race will begin on Friday August 9 at 12.15pm. Slessor Gardens will be open from 9.15am with family friendly activities for all ages and abilities.

A number of local clubs and community groups will take on a short circuit before the start while there will also be various other activities available including a skills track with ramps, kickers, tabletops, seesaws and skinnies. Strider will also be on hand to provide youngsters from just 1 and a half years old with the opportunity to take on a balance bike obstacle course, and much more.

Stage 1 will finish in Dunfermline before heading to Glasgow for the start of stage 2 which finishes in Perth, before the final day of action begins and ends in Holyrood Park in Edinburgh.