21/05/19
Back to articles
Tweets by DundeeCouncil 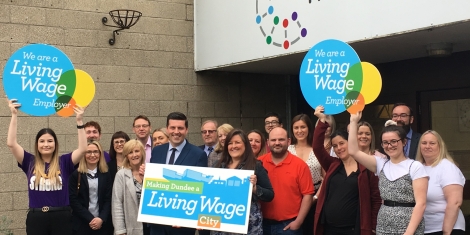 Their Living Wage accreditation ensures all staff and regular contracted workers earn the real Living Wage rather than significantly lower statutory minimum wage rates. Together these 6 small organisations employ 47 workers, 24 of whom have received a welcome pay boost to the real Living Wage, currently set at £9.00 per hour.

Sekai Machache, who works at The Circle and earns the real Living Wage, said:

"I feel that being paid the Living Wage is important because it makes you feel more valued by your employer. It’s their way of showing that they want you to thrive and not just survive”.

“I welcome the opportunity to congratulate Dundee’s latest Living Wage accredited employers. This follows Dundee being recognised in March as Scotland’s first city to demonstrate its commitment to becoming a Living Wage city.

“I am proud that Scotland has the highest proportion of people paid the living wage of any UK nation and I encourage all businesses to commit to doing the same for their employees. Paying the real Living Wage and becoming accredited treats people fairly, benefits the economy and sends a positive signal about the organisation into the wider community.”

"I am pleased that these local employers have so quickly demonstrated that they too share the vision of Making Dundee a Living Wage City.

“Every employer in Dundee can help tackle low pay in the City, and the Dundee Living Wage City Action Group are available to help and guide local employers through any challenges they might face in committing to the real Living Wage.

"Lots of businesses in the city already pay the real Living Wage and I want to encourage them to seek accreditation and move Dundee a step closer to achieving our goal of becoming the first Living Wage City.”

“Dundee are the first City to begin delivering their ‘Making Living Wage Places’ plan, which has already resulted in a spike in awareness and interest from employers on becoming Living Wage accredited.

We call upon prominent local employers in Towns and Cities across Scotland to step forward to begin their journey with us on Making Living Wage Places too.”