08/05/19
Back to articles
Tweets by DundeeCouncil 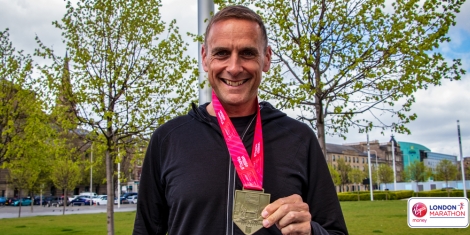 This month is “Healthy Month of May” and we sat down with Raymond Tully, a Dundee City Council Engineer, to talk about his remarkable success at the  2019 London Marathon...

A placing in the top 12% of finishers in the London Marathon may seem unachievable for most of us, but for Raymond Tully it was more than a finish line, it was start of having the life back he nearly lost.

Two years ago Raymond, a keen cyclist and runner, noticed he was struggling with day-to-day tasks such as walking up the stairs. A few months after starting to feel like this, Raymond collapsed in his Tayport home, he had suffered a doublepulmonary embolism, and was very close to death.  The doctors told Raymond that only 15% of people would have a chance of survival and they believed his active and healthy lifestyle were the main reason he is still here to this day.

Keen to point to his wife as being the main reason he survived, Raymond explained to us that she revived him when he collapsed. And it was so lucky for him, as normally she wouldn’t have been at home at this time. After a couple of months of recovery, and spurred on by his wife and daughter's love for running, Raymond decided to enter the world famous London Marathon.

Over 42,000 people ran the London marathon this year and as Raymond battled the 26.2 mile course cheered on by thousands of spectators, or as Raymond described them as a “wall of noise”, thoughts turned to his journey and how far he had come. This was it, the 17-week plan of training was done, and 99% of the race was complete, only the last grueling kilometre to go. Raymond has recently lost his gran and thinking of happy times with her brought him over that finish line.

5,303rd place - an amazing result for anyone, but for Raymond this was against all odds and truly a remarkable success. So congratulations to Raymond on his fantastic achievement.

Raymond has already signed up for next year's marathon and hopes his story will inspire others to get fitter and take more exercise. For anyone wanting to take up running Raymond suggests park runs or joining one of the many running clubs out there, Raymond is part of Dundee Hawkhill Harriers and they have been massive help and encouragement to him. Who knows, maybe you'll be running alongside him in London next year.

For more information on staying healthy  and active in dundee, please see http://www.leisureandculturedundee.com/leisure-sport