05/03/19
Back to articles
Tweets by DundeeCouncil 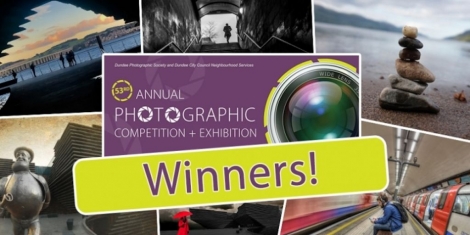 Details of the winning photographs of the 53rd Annual Photographic Competition + Exhibition have been revealed.

An exhibition of entries will be on display in the Central Library, Wellgate Centre from 6 March until 20 March.

The competition is run annually and is open to all photographers living within the boundaries of Dundee, and to all members of Dundee Photographic Society.

The prizes up for grabs were:

This trophy and prize voucher, is awarded for the best 3 images in print and/or projected image with the highest total marks in the competition which best portray Dundee.

This trophy was presented by Messrs Robert and Ivan Saunders to commemorate their father who was an early exponent of colour photography. Awarded annually for the best projected image taken in any park in Dundee. Dundee

The DPS trophy was donated by Dundee Photographic Society in recognition of the photographer who, overall, obtains the highest aggregate points from projected image, monochrome and colour print sections in the open competition. This will automatically include all images submitted for the Dundee Corporation and Robert Saunders Competitions.

Under 18 - The Jim Coleman Trophy