29/01/19
Back to articles
Tweets by DundeeCouncil 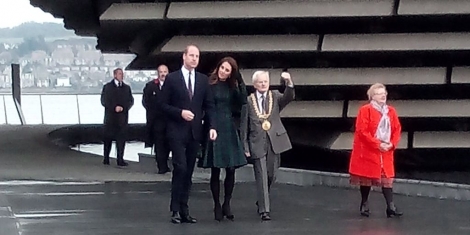 Their Royal Highnesses met some of the team who created Scotland’s first design museum, which opened its doors for the first time to the public on Saturday 15 September 2018.

They also greeted members of the public outside the museum on their departure.

The Duchess of Cambridge is the first Royal Patron of the V&A, continuing the museum’s long-standing relationship with the Royal Family from the V&A’s founding in 1852.

V&A Dundee has welcomed over 380,000 visitors since opening and was recently recognised as the world’s Best New Public Building by Wallpaper*, the international design magazine.

Lord Lieutenant Ian Borthwick, Lord Provost of Dundee, said: “I am delighted to welcome the Duke and Duchess of Cambridge to V&A Dundee. This magnificent building is continuing to raise the city’s global profile and celebrates Scotland’s rich cultural heritage.

“Dundee is a UNESCO City of Design, a place where culture is helping to transform people’s lives. This museum has had huge benefits for the people of Dundee. It is continuing to bring tourism into our city, improve our reputation and create vitally important jobs.”

Philip Long, Director of V&A Dundee, said: “We are honoured to be welcoming the Duke and Duchess of Cambridge to officially open V&A Dundee.

“This official opening marks the beginning of a very exciting year for V&A Dundee, with upcoming exhibitions on videogames, robots and the future of design. Through an eclectic programme, we aim to inspire people and provoke discussion about the role of design in everyone’s lives.”

V&A Dundee’s construction and fit-out took three and a half years to complete and it stands at the centre of the £1 billion transformation of the Dundee waterfront, once part of the city’s docklands.

With its complex geometry, designed by Kengo Kuma and inspired by the dramatic cliffs along the north-east coast of Scotland, it stretches out into the River Tay – a new landmark connecting the city with its historic waterfront, and a new major cultural development for Scotland and the UK.

At the heart of the museum the Scottish Design Galleries feature 300 exhibits drawn from the V&A’s rich collections of Scottish design, as well as from museums and private collections across Scotland and the world.

At the centre of these galleries stands Charles Rennie Mackintosh’s magnificent Oak Room, which has been meticulously restored, conserved and reconstructed through a partnership between V&A Dundee, Glasgow Museums and Dundee City Council. Visitors to the museum can experience once again Mackintosh’s extraordinary talent in designing this room, lost to view for nearly 50 years.

The ambitious international exhibition programme opened with Ocean Liners: Speed and Style, organised by the V&A and the Peabody Essex Museum in Salem, Massachusetts, the first exhibition to explore the design and cultural impact of the ocean liner on an international scale. This runs until 24 February 2019.

V&A Dundee’s 2019 exhibition programme will explore videogames, robots and the future of design.

The museum will celebrate the design and culture of contemporary videogames with the V&A’s spectacular show Videogames: Design/Play/Disrupt, from 20 April to 8 September 2019, and then go on to examine the current boom in robotics with the exhibition Hello, Robot. Design between Human and Machine from 2 November 2019 to 23 February 2020.