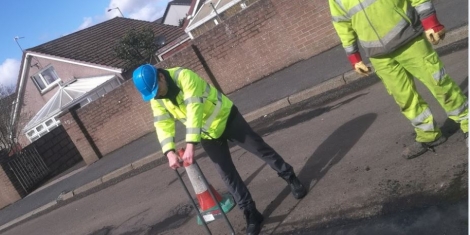 A PAIR OF award-winning partnerships are consistently delivering better road maintenance and street lighting in Dundee according to two new reports.

The current five year deals with Tayside Contracts were agreed last year and have resulted in consistently low levels of pothole defects and the most reliable street lights of any Scottish city.

Mark Flynn depute convener of Dundee City Council’s city development committee said: “As well as delivering top class performance the Road Maintenance and Street Lighting partnerships have allowed the council to make considerable savings, and so renewing both deals has been beneficial to the people of Dundee in a number of ways.

“Our road network and street lighting continues to perform at a consistently high level in comparison to other local authorities in Scotland.

“The Road Maintenance Partnership (RMP) identified and addressed 10,448 potholes during 2017/2018 and in the same period we had the fewest reported lighting faults while consuming the least amount of electricity per street light of any Scottish city

“Close working relationships, years of experience, pooled knowledge and shared goals all combine to deliver the impressive performance of both partnerships.”

The work of the RMP is monitored and compared with national standards and based on 77 key performance indicators. When compared with other Scottish cities Dundee had the lowest number of the most severe faults and a significantly lower number of claims and claims payments from damage to vehicles caused by carriageway defects.

The on-going successful street lighting partnership between the council and Tayside Contracts repairs and maintains more than 24,000 street lights in Dundee.

Last year the RMP gained national recognition for its level of service, and operational approach, picking up the annual Association of Public Service Excellence (APSE) Service Award for Best Highways Service Team and being chosen as a finalist for the MJ Award for Highway Management and the APSE Best Performer Award.

Meanwhile the Street Lighting Partnership have scooped prizes for their health and safety approach.

Both reports will be considered by the city development committee on Monday (January 28).