27/11/18
Back to articles
Tweets by DundeeCouncil 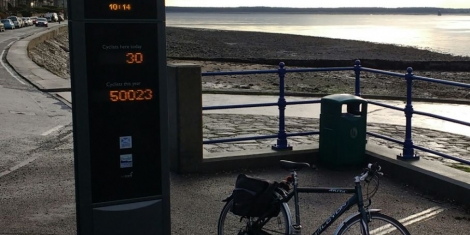 MORE than 50,000 bike journeys have been recorded in six months on a city cycle route.

The number of two-wheeled travellers that have passed the grey futuristic counter at Douglas Terrace, Broughty Ferry recently ticked past the 50,000 mark.

Dundee City Council cycling spokesperson Kevin Cordell said: “Since it went live at the start of June it has been counting the number of people cycling as a key part of measuring and evaluating the growing investment being made in it in Dundee.

“We want to get more people cycling, more often, and the counter measures progress on what we always thought was a popular route, but now have the evidence to back that up.

“Even as the nights get longer and the days get colder I would still encourage commuter and leisure cyclists to ride along the path.”

Mark Flynn deputy convener of Dundee City Council’s city development committee added: “The counter's electronic scoreboard displays both the daily and annual number of bikes that have passed across the sensor laid in the pathway. It shows that on average a bike went over the sensor more than 270 times every day in the past six months.

“We installed the counter in partnership with Sustrans and the Scottish Government and together we are keen to enhance and improve cyclists’ experiences of the network in the city.”

Funded by Sustrans and Transport Scotland, similar units have been installed at popular cycling spots across the country.

The counter is part of Dundee City Council’s wider commitment to increase cycling, walking and more sustainable forms of transport across the city.