26/09/18
Back to articles
Tweets by DundeeCouncil 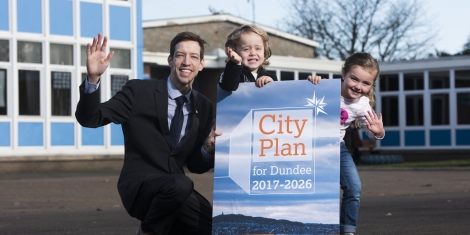 An update report on the City Plan has highlighted progress in delivering the Dundee Partnership’s vision for the future of the city.

Members of the Policy and Resources committee were told this week that, 12 months on from the launch of the 10-year local outcomes improvement plan, performance has been improved or maintained against two-thirds of its key indicators.

The report states: “The overall performance monitoring of the City Plan shows that the Dundee Partnership is maintaining a high level of continuous improvement.”

Successes over the year include reducing unemployment, particularly in 16 to 24-year-olds, lowering numbers of fire casualties and cutting childhood obesity.

The report also highlights that there are increasing numbers of people who agree that people in their community can influence decisions affecting that area.

Dundee Partnership chair and leader of the city council, John Alexander, said: “Dundee is on a journey – and even in the short time since the City Plan was launched we’ve come a long way.

“The last year has seen new schools open across Dundee, a Drugs Commission launched, and the city secure the Social Security Scotland HQ with the creation of 750 jobs.

“We also ran Dundee Decides, which allowed over 11,000 people to have a direct say in how money was spent improving their local community.

“More recently we’ve had V&A Dundee open its doors to the public, adding an estimated £11.6m per year to the local economy.”

The report notes that unemployment levels continue to fall and the target for creating more tourism jobs has been passed.

Earnings of resident workers in Dundee City have risen by 4%, closing the gap on average earning across Scotland.

Dundee City Council and its partners were declared among the Living Wage Champions for the UK. Partners are now building on this to become the UK’s first accredited Living Wage City.

Councillor Alexander added: “While there is much to be positive about in this report, we recognise there is still some way to go in achieving all of our ambitions.

“The many achievements highlighted in this update are about doing just that – dealing with the deprivation and inequality which is at the root of many issues in our communities.

“This is year one of a bold 10-year plan, and we are determined to deliver on our vision to create a fairer and more prosperous Dundee for everyone.”