07/12/17
Back to articles
Tweets by DundeeCouncil 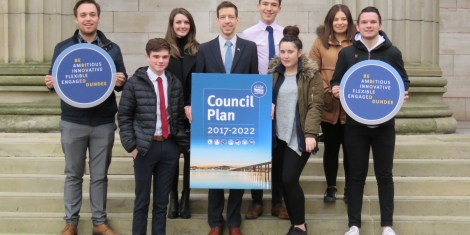 A “roadmap” detailing how Dundee City Council will deliver its key priorities over the next five years will be considered by councillors next week.

The Council Plan for 2017-2022 also includes scorecards allowing the public to measure progress in areas as diverse as school attainment, affordable housing and health inequalities.

It seeks to build on the success of the previous Council Plan, which showed the authority had contributed to an increase of 2,200 jobs in the city, alongside significant improvements in young people entering positive destinations and major investment in improved council housing.

Council leader John Alexander said: “A huge amount of work has already been done by the council and its partners to harness Dundee’s potential. The Council Plan is our roadmap for the next part of that journey.

“Over the next five years we’ll build on the strong partnerships that already exist across the public, private, education and third sectors.

“There is more to come from the V&A opening in the new Waterfront, Dundeecom delivering jobs in the port like those announced by Well-Safe Solutions just this week, the new Scottish Social Security Agency HQ and the Tay Cities Deal.

“These will go some way to achieving our target of creating more than 5,000 new jobs for people in Dundee over the next decade.”

“This is a bold and ambitious plan to tackle the root causes of social exclusion to ensure no-one is left behind in the development of the new city economy,” said Councillor Alexander.

“Our Fairness Action Plan, Employability Partnership and measures to close the attainment gap are top priorities.

“To get where we need to be relies on our ability to adapt and to engage with our communities, to collaborate more with neighbouring councils and to continue to be flexible and innovative.”

Key performance indicators and actions from the plan will be published on the council’s website, and will also be subject to six-monthly reports to councillors.

Councillor Alexander added: “We know that, as a council and as a city, a lot of work lies ahead if we are to make our vision of a smarter, fairer, more vibrant and attractive Dundee a reality.

“Challenges should not temper our ambition, however, and that’s why this plan is so important. It highlights the extensive array of work already under way, sets priorities for the future in line with those of our Dundee Partnership colleagues, and, importantly, provides clear measures of progress.”

Councillors will be asked to approve the plan at a meeting of the Policy & Resources committee on December 11.