05/12/17
Back to articles
Tweets by DundeeCouncil 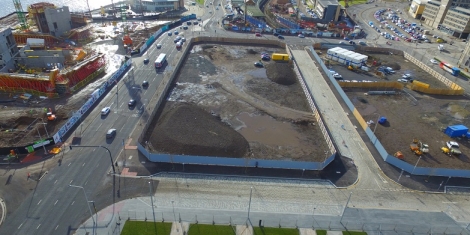 WORK TO create a £15.5million office block in the heart of Dundee’s Waterfront is set to begin next month.

Councillors are being asked to approve the appointment of a contractor to build on land at Site 6, adjacent to the new V&A Museum.

The five-floor development will include Grade A office space, ground floor commercial units, a service yard and dedicated parking.

Due to be completed in February 2019, the building forms part of broader development on the site which received planning consent in the summer.

A report being considered by the city development committee next week seeks approval to accept the tender submitted by Robertson Construction on behalf of Wilmott Dixon.

Funding for the project is available as part of the Scottish Government’s Growth Accelerator Fund and prudential borrowing from income received from leasing the commercial units within the building.

Lynne Short convener of the city development committee said: “This is another important milestone in the transformation of our central Waterfront.

“There can be few locations matching it anywhere in Scotland, just yards from the new V&A and the River Tay. It’s also right next door to our new railway station.

“Creating top-class office space like this bolsters the ongoing efforts of the council and its partners to attract blue chip employers to the city.”

The report, by executive director of city development Mike Galloway notes that there will also be a community benefits programme including guarantees to employ local labour, apprenticeships and local contract spend.

It also confirms that all employees working for main contractor Robertson Construction and all sub-contractors on the site will be paid the Living Wage, currently £8.75 and due to go up every November.

Cllr Short added: “This development and others in the Central Waterfront will not only act as a magnet for future employers, but also create opportunities for workers in the construction sector.

“It’s another strong signal that Dundee is a city open for business.”