24/11/17
Back to articles
Tweets by DundeeCouncil 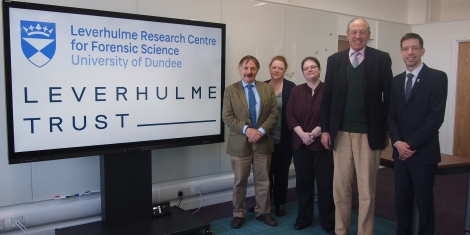 KEY FIGURES in the multi-million pound Tay Cities Deal bid have delved into the detail of one of the proposed projects.

Leading councillors behind the bid have visited University of Dundee’s Leverhulme Research Centre for Forensic Science.

As part of the bid’s drive to exploit the area’s strengths in digital innovation and to create, stimulate and protect jobs it is seeking investment to support a Forensic Science Catapult Centre and a new innovation cluster at the site.

Cllr Alexander added: “Dundee University is rightly recognised as the UK lead for research and education in forensic science and by leveraging this position, we want to unlock and exploit the untapped commercial potential to create new products, companies, jobs and opportunities to serve justice and develop safe and secure societies.”

Cllr Myles said: “This proposed project, as with so many of the others we have put forward, looks to bring jobs to the region that will drive local and national growth, but it has a third dimension of seeking global justice through its activities.”

Cllr Karen Marjoram, who leads on the Tay Cities Deal bid for Fife Council said: “By 2027 this project aims to create new global standards in tests, techniques, analysis, communication and practice in forensic science and to build a specialist business portfolio around the growing market for justice system design and technology.”

Cllr Ian Campbell said: “The scope and depth of the Just Tech bid is truly outstanding and with the skills, talent and ambition we already have to compete and meet demand in a growing world market I am confident that it will be a success.”

Professor Niamh Nic Daeid, one of the directors of the Leverhulme Research Centre for Forensic Science said: “This bid seeks to seed a new economic cluster for the region and with the support of the UK and Scottish governments we have an opportunity to turn our world leading research into jobs locally and economic growth nationally.

“We are thrilled to have the support of the leading council politicians from across the region.”

The Tay Cities Deal is a partnership between local, Scottish and UK governments and the private, academic and voluntary sectors which seeks to create a smarter and fairer Angus, Dundee, Fife and Perth & Kinross.

In total, the Tay Cities Deal will attract planned investment of more than £1bn over 10 years.

These projects have the potential to deliver as many as 15,000 job opportunities across the region. www.taycities.co.uk

THE LEADER of Dundee City Council today thanked the thousands of workers helping the city respond...