08/11/17
Back to articles
Tweets by DundeeCouncil 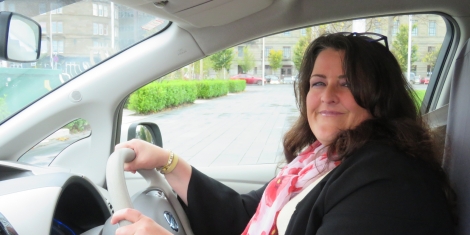 THE FUNDING campaign to install a bronze plaque in honour of a local pioneer of electric power has been given a boost.

James Bowman Lindsay will be one of five leading lights commemorated in phase two of the Discovery Walk at Dundee’s waterfront next spring.

And now a leading councillor is backing the funding drive by highlighting the city’s record of embracing electric vehicle use.

Lynne Short convener of Dundee City Council’s city development committee said: “Without the work of James Bowman Lindsay and those creative, curious people who built on his findings we wouldn’t be able to harness electricity the way we can today.

“If Lindsay had taken his research in a different direction, who knows, instead of being named after Nikola Tesla another pioneer of electricity, the leading luxury brand of electric car might be a Lindsay!

“Even though he doesn’t have a car named after him yet we’re going to make sure that James Bowman Lindsay’s local connections and innovations are not forgotten with his rightful commemoration in the next phase of the Discovery Walk.

“To help get the money together all you need to do is buy a badge…and then wear it with pride!”

Carmyllie-born Lindsay studied at St Andrews University and later carried out many experiments in Dundee, with his most notable being his investigations into electric light.

In 1835 he gave a successful demonstration at the city’s East Dock of an incandescent lamp that was practical, constant and could be used for reading.

His innovative work on underwater telegraphy was recognised later by his more famous contemporary Michael Faraday and also by radio pioneer Marconi, amongst others.

Dundee City Council has partnered with Evolt to install a network of charging points for electric vehicles in and around the city.

It will be one of the most concentrated networks of any Scottish city, supported by a range of incentives and projects to encourage EV uptake, such as a free parking scheme, that other cities and local authorities do not currently have.

Dundee City Council now has the largest fleet of electric vehicles of any local authority in the UK (83 to date) and is a past winner of Green Fleet magazine’s public sector fleet of the year and low carbon vehicle operator of the year.

City council mechanics have been attending dedicated electric vehicle (EV) training courses towards gaining recognised qualifications in the repair and maintenance of EVs to allow the continued expansion of the council’s electric fleet and earlier this year TESLA chose Doubletree Hilton in Dundee to install a strategic charging hub with space for eight of its vehicles.

The council owns 58 charging point at eight publicly available charging locations, including Scotland’s first rapid charger, with work on the new charging hub expected to start soon with it planned to be up and running by the end of the year.

Cllr Short added: “Discovery Walk has already proved to be a fascinating insight for visitors and local people into the world-class pioneers that were born in Dundee or called the city home.

They are also on line https://goo.gl/BquhVo and all income will go to pay for the production and installation of the new plaques next year.