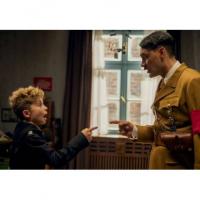 We've been big fans of Taika Waititi since Boy first screened as part of our Discovery Film Festival in 2010. From What We Do in the Shadows to Thor: Ragnarok, we've proudly watched his career take off. Although each film is different, they all have Waititi's sharp observational style, off-beat humour, and warmth. There's his chutzpah too - only Waikiti would attempt Jojo Rabbit, a satire about the Third Reich seen through the eyes of an impressionable young boy.

Jojo Betzler (Roman Griffin Davis) is a precocious kid in wartime Germany with an egregious blind spot. Socially awkward, but a proud member of the Hitler Youth, Jojo passes much of his time with his imaginary friend Adolf (Waititi himself), a cuddly, energetic, pep-talking version of the Führer. Having completely bought into Nazi dogma, Jojo is incensed when he discovers that his mother (Scarlett Johansson) has been working for the resistance, helping to keep safe the Jewish people he's been taught to hate. But when he befriends the young Jewish woman hiding in the attic (Leave No Trace's Thomasin McKenzie) Jojo starts to question everything.

Waititi, who has long had a gift for infusing even his wildest comedies with real heart, guides this film from taboo-breaking scenes reminiscent of Monty Python or Mel Brooks into far more emotional territory, as Jojo confronts the damage he's done. A singular and essential response to both history and our current moment; for us, Waititi has done it again.