28/10/19
Back to articles
Tweets by DundeeCouncil 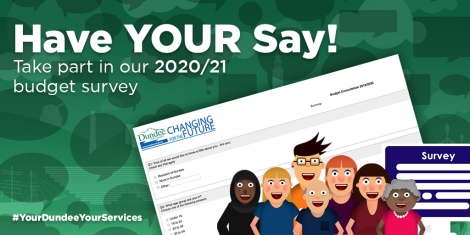 DUNDONIANS will get a chance to have their say on the council’s spending priorities before the next budget is set in February.

The consultation announcement comes amid unprecedented pressures on council budgets with less money from central government, increasing demands on some services and growing expectations.

Willie Sawers, depute convener of Dundee City Council’s policy and resources committee and spokesperson on finance, said: “Last year more than 1100 people made their voice heard by helping us to identify what the council’s spending priorities should be.

“Decisions that were taken as part of the budget setting exercise reflected feedback from the consultation, which is why we want to make sure as many people as possible participate this year and tell us where they think the council’s limited resources should be focussed before difficult decisions are taken.”

Depending on funding settlements, the council expects to have to save £17.3m in the next financial year. These figures are before any additional income from annual increases in the current level of Council Tax.

In December the Local Government Finance Settlement will be announced and in January a report will be submitted to the council’s policy and resources committee detailing the grant settlement and what it means for the council’s budget. This report will also include the proposed procedure for setting the council's revenue budget and council tax for 2020/21 in February.

Cllr Sawers added: “All of the information that we get is pulled together to help inform the decision-making process and feedback from the consultation supports the council to better understand exactly what the people of the city are thinking.

“That gives us greater insight that we can use to base our financial decisions on.

“Everyone who lives and works in Dundee has a stake in the council and our decisions will directly affect them, so it is vital that as many people as possible take part in the conversation.”

It will be open until November 25.